skip to main | skip to sidebar

I've had this blog for almost two years now and in general I can say that it has been good to me. It has also not changed very much in that time. Uncharacteristically for google, they have failed to pay attention to improvements in blogging design that have been made since the days when this place used to be the best there was. Even the recent attempts with blogger beta still aren't up there yet in terms of features, though they do seem to have some cool ideas.

Well, I have been paying attention and I think the time has come to move on to better things. Now, the plan isto eventually get my own webspace where I can host my own blog and do anything to it I want. Until then though, I'm moving this place down the street to wordpress which is far more customizable and has cooler features.

Hence, the new address is: ghanageek.wordpress.com

Hope to see you there
Posted by Kwasi at 7:35 AM 4 comments:

Remember I mentioned my new mobile writing device? Well here she is.

Pretty isn't she? Ladies and Gentlemen, allow me to introduce Wakanda, A HP Pavillion dv2000z carrying

Not the most powerful system on the planet, but definitely loaded with enough power for my writing, coding and game playing needs. Right now she's running Windows XP Home(very occasionally) and Kubuntu Edgy(where this post is being typed)

I'll talk more about issues I have with linux, especially in Ghana, later.

She's still being configured though. I don't yet have all the software I want installed on either platform, though the linux box is much further along.

Speaking of configuration, if anyone has wallpapers of the following, I'd love to get my hands on a copy

1. Anything Milestone Comics related, but especilly Static and Hardware
2. Black Panther. She is called Wakanda after all
3. Anything Martial Arts related

Otherwise, this is how I'll be typing most of my posts to you now. Lets hope she holds up as well as she looks
Posted by Kwasi at 10:50 AM 2 comments:

Hey people. I guess I've been gone for a while. Sorry about that. I have gotten pointed reminders from several people that my posts were missed. Well, I'm back to regular writing now. About time too. I honestly have missed this a lot.

Luckily I now have my own writing hardware outside of work (more on that later) so I write my posts at home and put them up when I get online later. This should mean I'm back to regular posting. Barring internet issues (more on that too) or things of that nature.

I have been thinking about content in my time off, in case you were wondering. The tone of the blog will probablybe changing slightly. Mostly because I'll be expanding my range of topics by quite a bit. I figure since this is my space then I get to pick what I talk about here. Hence, a lot more science fiction and comic book talk, a lot of stuff on Ghana and Africa in general, a lot of work related posts (science, linux, programming mostly), some martial arts and the regular personal development/human observation stuff you've come to know and love.

Obviously there will be some overlap in all of this. I hope that the stuff that comes out of my head/fingers will be of interest to all of you. Either way I'll still be here. And you're still welcome
Posted by Kwasi at 1:56 PM 3 comments:

And the wheel continues to turn

In the space of three days last weekend I gained a cousin, lost an uncle and saw my father turn 60.

My mother's younger brother died on friday night of cancer. A couple of months ago he fell off a chair and fractured his leg. When it refused to heal he went in for tests and found out that there was cancer in the bone. When they took him in for an MRI they found masses in his leg, his lungs and his brain. From then on it was all pretty much downhill. And pretty fast too.

As of my World Cup post he was lying in bed doped up on painkillers, but still lucid. A couple of weeks later he could barely put together legible sentences and couldn't remember some people. He spent the last two weeks of his life in the hospitol being watched over by his family and slowly slipping away. By the end I was just hoping he wouldn't have to be so helpless or in so much pain anymore.

Last Thursday his younger brother had his second chld. A boy. He gets named today. On friday he passed away. Friday was also my father's 60th birthday.

Not quite the day any of us wanted. At this point I just take comfort in the fact that he isn't in pain anymore. It hurts to see my mother broken up though. Things have been bad enough for her as it is recently. I'm just hoping we're done with the bad news for now.

Spend all the time you can with those you love people. You don't know when or how you'll see them again
Posted by Kwasi at 1:42 PM 3 comments:

They could use some cash

My fellow hybridized African brethren Uchenna and Denis are in the process of trying to make their dream come true by writing, producing and directing a movie in Nigeria. Sadly they are out of cash and not done yet so I'm lending my support to the drive.

Anyone who feels like being generous can send cash by paypal to takestyle@hotmail.com. Otherwise you can leave a comment and we can work out alternate arrangements.

This is not bogus people. I wouldn't ask except these two are trying to do something great and it needs a chance to grow. Don't take my word for it. Check out their blogs and see what they have to say for themselves. Besides, how often will you get to say you legitimately sent money to Nigeria (Just jokes my naija people. Please don't kill me)

PS. There's a backlog of posts I need to get up. More coming soon
Posted by Kwasi at 3:16 PM 5 comments:

I believe I promised some overdue pictures

These are mostly of from the day of the Ghana - USA game. I'm sure you'll have no problem telling which are before and which are after.

I'd talk about the games now, but I'm hungry and about to head home for some of that great home cooking. Plus monday is a holiday. Well, technically today is, but its been pushed up to monday. Therefore those of you who absolutely can't wait to hear what I think will unfortunately have to wait a little while. In the meantime though, enjoy

sidenote: apologies to those on dialup. I assure you that *I* think its worth the wait 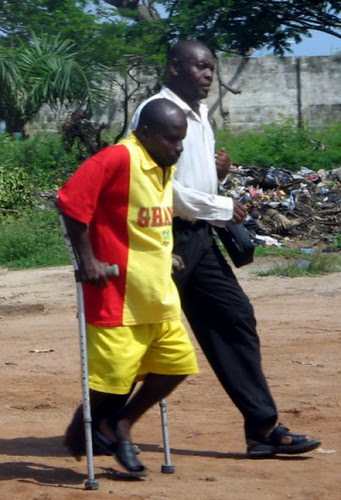 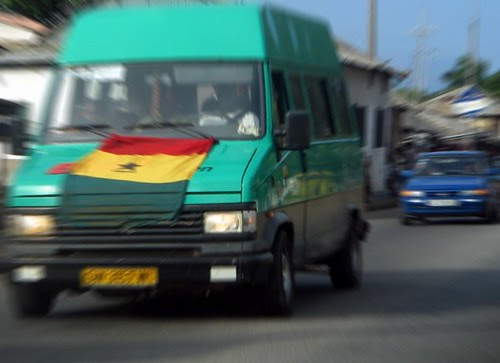 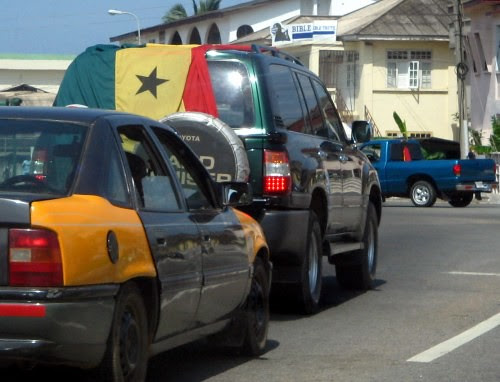 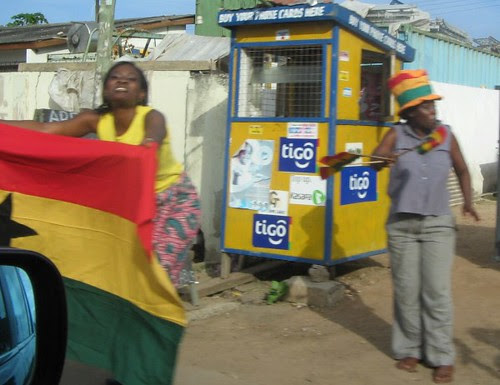 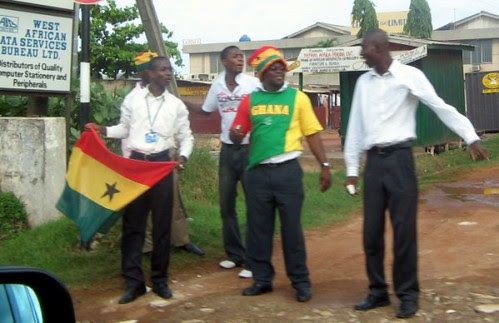 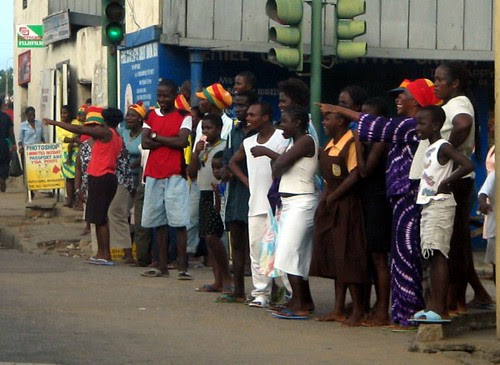 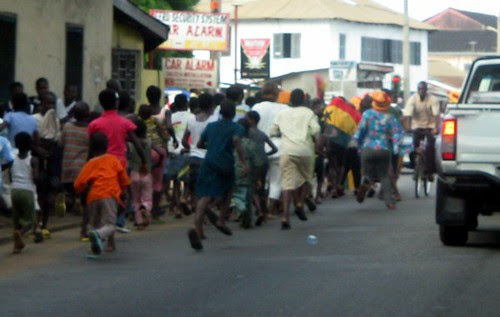 I now have a contract

The job has officially signed me up for the duration of my stay. And, to be perfectly honest, they are overpaying me. I'd do the job for the cost of bus fare, which would be nothing since I usually ride with my father. Still, the money is nice and it does provide some additional incentive to deliver.

As far as what I'll be doing, my primary responsibilities are to the fledgling High Performance Computing department and to the AITI-KACE blog, which I am writing.

As far as the blog goes, I have been given contractual permission to 'freely and joyously speak the truth'
Now, anyone who has ever heard me speak about journalism and the responsibilities of those who have a voice and an audience (think Jon Stewart on Crossfire or any other place he has spoken about the press) might have an idea of where this might occasionally lead to. Much like Bomani, I'm wondering how long it'll take until they figure out what they just did.

Either way, this is shaping up to be a fun ride.

Oh, expect my comments on Ghana, Brazil and the USA tomorrow. With pictures.
Posted by Kwasi at 8:52 AM 3 comments:

Kwasi
I was born and raised in Ghana, West Africa, moved to the U.S when I was 18 for college. Now I'm back in Ghana taking a break from grad school, working and rediscovering my country. I read too much, watch too many movies, listen to too much music and am very much enamoured with the idea of hitting people. Plus I have an unfortunate tendency to be brutally honest which gets me in trouble from time to time.